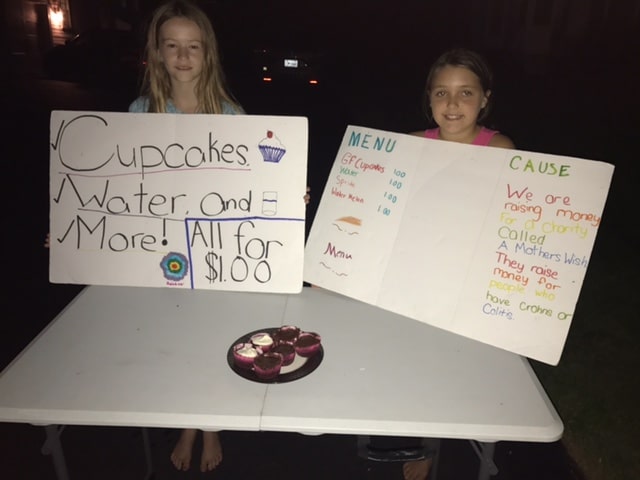 CAROLINE,  A YOUNG LADY WITH CROHN’S DISEASE AND HER FRIEND EMMA TAKE THEIR PASSION TO THE NEIGHBORHOOD AND SELL HOME MADE CUPCAKES!!! THAT’S THE WAY TO RAISE AWARENESS GIRLS! 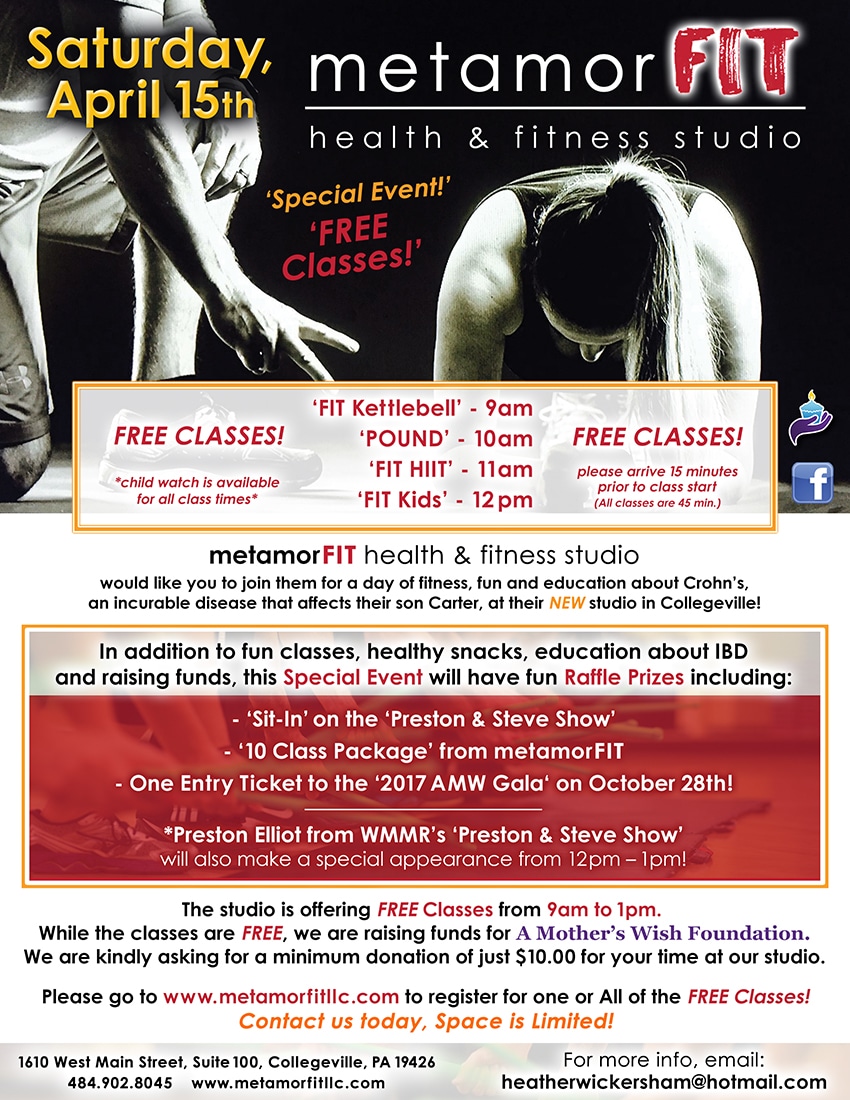 We are so excited to announce a very important event that we will be having at the studio on April 15th!  While we realize this email is lengthy, please take two minutes to read as this event is very personal to us as a family.

In January 2016 our youngest son Carter was diagnosed with Crohn’s disease when he was just 5.  While it is incredibly difficult to hear that your son will live with a chronic incurable illness for the rest of his life, there have been so many positive things to come out of his experience and one of them is the amazing support system we have gained in the process.  My wife, Heather, was lucky enough to be connected with other Crohn’s moms in the area through the non profit organization A Mother’s Wish.  This amazing group of women have given our family support in a time of uncertainty and we would like to give back that support.

We will be having free classes starting a 9 am on Saturday April 15th.  While these classes are free, we ask that you bring a minimum $10 dollar cash or check donation with you to class.  Any and all donations we receive will go directly to A Mother’s Wish for them to use to support other families in our immediate community that suffer from Crohn’s.  Your donations for A Mother’s Wish will also help fund research so that one day we may find a cure for adults and kids like Carter.

Classes that day are as follows:

In addition, we will have healthy whole foods snacks which are favorites for our family and other families we have met along this journey.  Heather I will be here to talk about nutrition, and the whole foods based way of life we have adopted since Carter’s diagnosis.  There will also be a few adult beverages for you to enjoy after class!

We will also be raffling off three very special gifts including a ticket to A Mother’s Wish Casino Night Gala in October, A 10 class package from metamorFIT AND A FREE SIT IN ON THE PRESTON AND STEVE SHOW!

We are also so excited to announce that Preston from WMMR’s Preston and Steve show will be in the studio at12 pm!

If you cannot make it to a class, please consider stopping by to meet members of A Mother’s Wish and the metamorFIT family, to purchase some tickets, to enter yourself into the raffles, or to meet Preston!

We really look forward to seeing you all on April 15th!  Please see the flyer below for more information.  You can register for classes by going to our website at www.metamorfitllc.com. 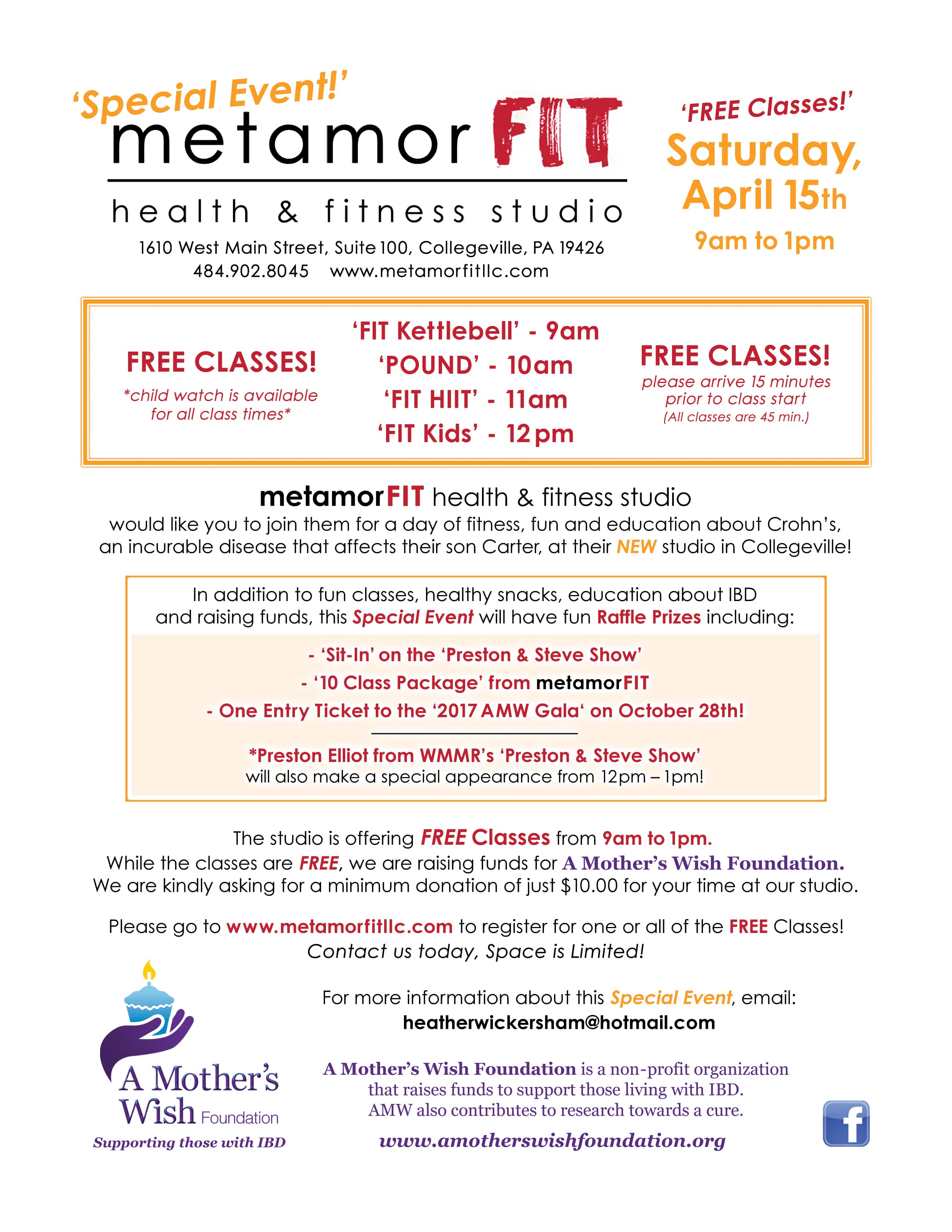 Event announcement!
Stay tuned for details on our next big event on April 15th! Come get FIT while raising money for A Mother’s Wish at metamorFIT in Collegeville, PA! Save the date! Many more details to follow!

It is with great pride that Heather Wickersham has chosen to be a part of this amazing group and to apply her terrific social media skills to our efforts. Please welcome Heather and her family and friends with open arms to join us in this journey! 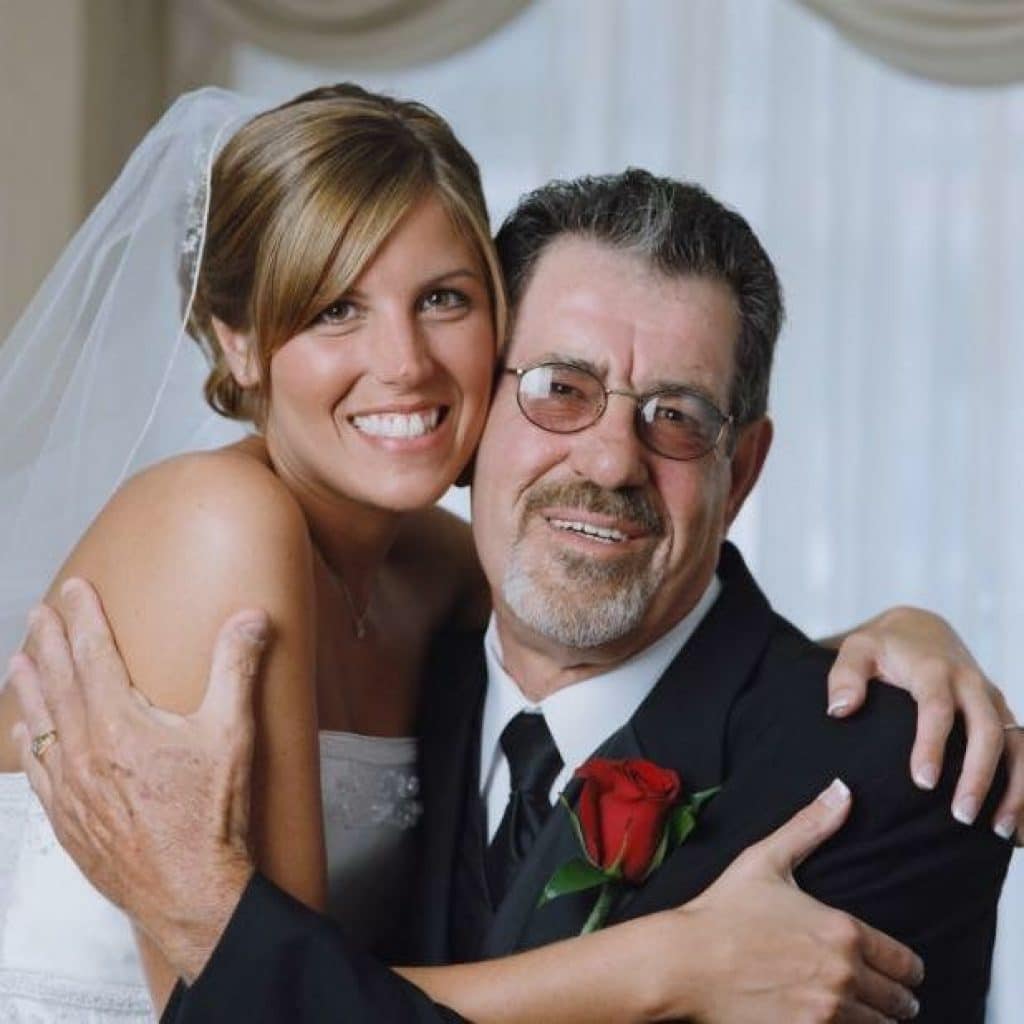 We are thrilled more than words can express that we have crossed paths with you and your family!

A Mother’s Wish is sponsoring the CHOP WALK  FOR HOPE for the second time!

As a charitable, tax-exempt organization, Children’s Hospital relies on donations to make a difference in the lives of children. Every supporter becomes part of our mission to research better treatments for the future, to help families that cannot afford healthcare, and to provide quality-of-life programs and services in our Hospital and in the community.

Thank you again for all you do to support A Mother’s Wish so we are able to do so many wonderful things in our community!

Ellen and Michael Araten have been supporting AMW and other organizations that help those suffering with IBD for many many years. Michael and I served on the CCFA Board together about 10 years ago and we have not stopped fighting for this disease since!

A Mother’s Wish is honored and excited to Sponsor the 2017 Renaissance Ball will be held on Saturday, October 21, 2017 at Vie (600 N. Broad St, Philadelphia, PA) at 6:30PM. It has been the premier fund raising event for the Philadelphia/Delaware Valley Chapter of the Crohn’s & Colitis Foundation of America for the past 42 years. It is designed to raise funds for research, and support programs for those who suffer from Crohn’s disease and ulcerative colitis, digestive diseases that affect nearly 1 in 200 Americans.

We thank Ellen and Michael for always being there for us! Now we will be there for you! See you in October!

Thank you to all our friends, families and sponsors, this year we are sending a record high amount of kids to Camp specifically for those with IBD issues. As a long time camper myself, I can’t begin to tell you how this warms my heart! When my son was little and dealing with Crohn’s disease, Camp was something he could not even think about going to, and it really crushed me. My best memories of childhood were at camp every year for 10 weeks for over 10 years! The fact that my son could not share in that joy killed my spirit.

It is with great joy and pride that I share with you all that we made this dream a reality for many children by joining together!

A Mother’s Wish  thanks you so very much for making this happen! 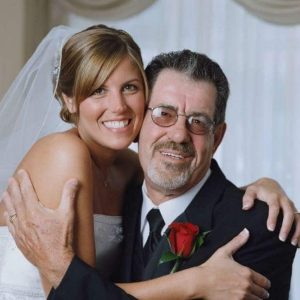 On January 18th 2017, the lives’ of one of our Crohn’s families was forever changed.  It was on this day that John W. Kliamovich passed away suddenly.  John was an amazing husband, father, great-grandfather, friend, and grandfather of nine, including Carter Wickersham, a six-year-old boy who suffers from Crohn’s disease.  In the last four years of John’s life, he battled with COPD and struggled to break free from the anxiety and depression that plagued him.  It was difficult for him to stay positive about his health, but one thing John was sure of was the strength of his grandson Carter.  Because of his love and support of Carter through his procedures, treatments and doctor visits, his family decided to request donations to A Mother’s Wish in lieu of flowers in his obituary.  John’s amazing friends and family helped raise $1,000 in his memory and in honor of Carter.  Besides his family and friends, John had a great love of golf.  At his funeral, this quote was read as a part of his eulogy, and I think he would have wanted to share this with all of you:

“As you walk down the fairway of life, you must smell the roses, for you only get to play one round.”  –Ben Hogan

Below is John’s obituary:

John Walter Kliamovich passed away at his home in Royersford, Pennsylvania on Wednesday, January 18, 2017, at the age of 74. John is preceded in death by his parents, John and Mary Ann (Grzywacz), and his brothers, Lawrence and Robert. He is survived by his wife of 41 years, Mary Ann (Meoli) Kliamovich; his daughters, Christine Fry and her partner Dennis Vetter, Kathryn Kantzios and her husband Nick, Cynthia Viglione and her husband Robert, Heather Wickersham and her husband Jeff; and his son, John Kliamovich Jr. and his wife Kim; and his brother, Carl Kliamovich. John is lovingly remembered by his nine grandchildren, Justine Swika, Melissa Martin, Anna & Nikole Kantzios, Ronald Fry, Zachary & Kayla Kliamovich, Jackson & Carter Wickersham; and two great grandchildren, Peyton & Bailey Martin. John was a loyal employee of Selas Fluid Processing (formerly Thermal Research) for 54 years, where he had the opportunity to travel the world to supervise the implementation of equipment engineered by his company. An avid golfer, he was a longtime member of Jeffersonville Golf Club and Linfield National Golf Course, where he formed many lasting friendships with his golfing buddies who lovingly referred to him as “Big John”. His Funeral Service will be held on Tuesday, January 24, 2017 at 10:30 AM from the Moore, Snear & Ruggiero Funeral Home, 224 West Main Street, Trappe, PA 19426. Friends may call on Monday evening, January 23 from 6:00 PM to 8:00 PM and on Tuesday morning from 9:30 AM to 10:30AM at the funeral home. Interment will take place in Limerick Garden of Memories. In lieu of flowers, donations can be made to A Mother’s Wish Foundation in honor of John’s grandson, Carter, who suffers from Crohn’s Disease. Please send donations to amotherswishfoundation.org or PO Box 503, Media, PA 19063. Arrangements by Moore, Snear & Ruggiero of Conshohocken, East Norriton & Trappe. (610) 489-7900 www.msrfh.com

As part of our commitment to providing educational opportunities for those suffering with or caring for individuals suffering from Crohn’s or Colitis, A Mother’s Wish Foundation is subsidizing $45 per person for each of the above classes. 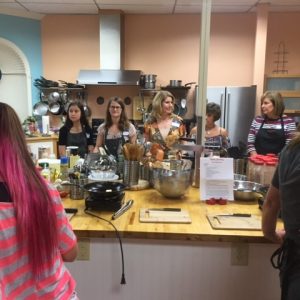 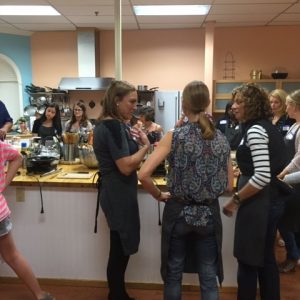 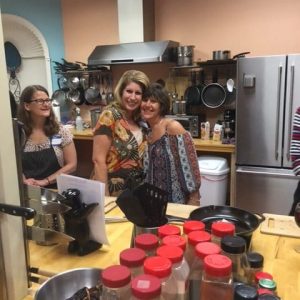 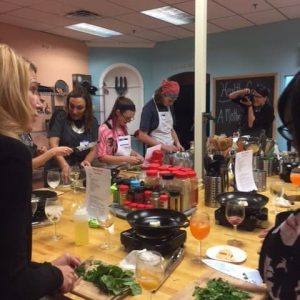 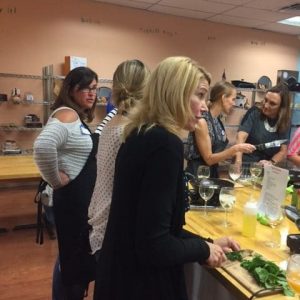 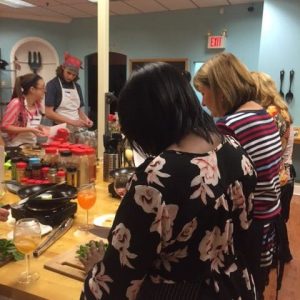 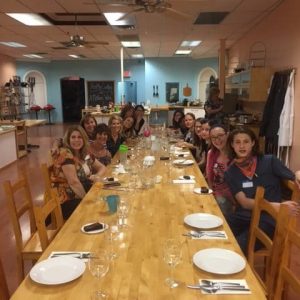 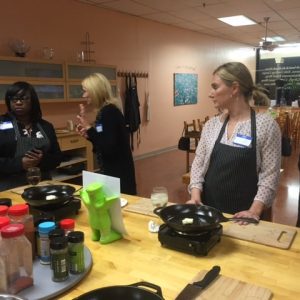 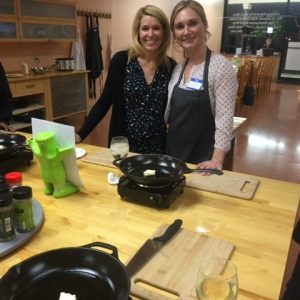 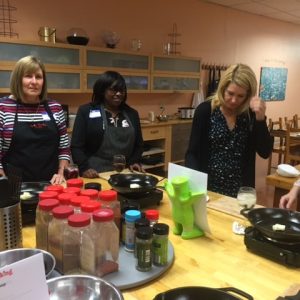 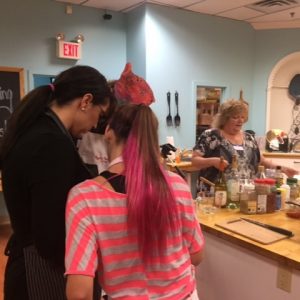