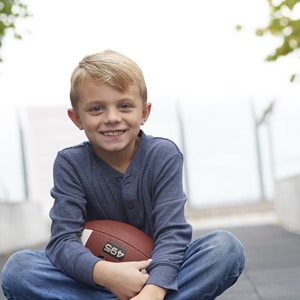 Meet Carter. He loves to play basketball and watch sports. He is happiest when spending time with his family and friends. Carter was diagnosed with Crohn’s disease in January 2016, at just 5 years old. This is his story of courage and strength…

In April of 2015, just before Carter turned 5 years old, we noticed he began to look and act differently. He had no energy and lost interest in playing with friends because he was too tired. His eyes were sunken and dark and he was not gaining any weight. By May, he was complaining daily about stomach aches. Thankfully, his pediatrician, Dr. Brogan, was as concerned as we were and sent him for blood tests, which revealed what they thought was a severe iron deficiency.

By the summer of 2015, he was attempting to take oral iron supplements with no luck. The oral iron caused vomiting and his hemoglobin levels were still extremely low. After a few more visits to the pediatrician and an emergency visit to CHOP, we were referred to Dr. Julie Stern in CHOP’s hematology/oncology department. By the fall, Carter had entered kindergarten and we still had no answers as to why our son was so sick. He was receiving weekly IV iron infusions, and loving the time he spent with Chelsea at CHOP King of Prussia, who helped distract him with crafts and games and talk about the 76ers. Dr. Stern, who had gone through various possibilities with us, had then directed us to CHOP’s GI Department.

Here we met Dr. Grossman and Dr. Conrad who performed an array of tests including an upper endoscopy, a colonoscopy, dexa-scans, video endoscopy (video capsule) and barium x-rays of his abdomen. Finally, on January 8th, 2016, Dr. Conrad called with the news that Carter had Crohn’s Disease. This diagnosis was very tough to hear as parents, but at least now we had an answer.

From there, he began a medication regimen of swallowing four, sometimes five, pills a day. Swallowing pills at age five should seem like a nightmare, but not for Carter. He took every test, pill, long drive to CHOP, weekly iron infusion, and diet change in stride. He has learned which foods are going to help him heal and which are going to cause him to flare.

We know that we would not be here today without the support of our family and friends, and especially Carter’s big brother Jackson. We are thankful for the amazing group of doctors that have been kind, gentle and loving along the way. Carter has shown us all what true strength and resilience is. He has kept a positive attitude through some pretty tough times. I recently asked Carter what he would tell another little boy or girl what it is like to have Crohn’s and his response was, “It’s hard. You have to do a lot of stuff that you don’t want to, but you just do it, because it makes you feel so much better.”